Harry Potter, The Boy Who Lived, was famous in the Wizarding World for not only surviving Lord Voldemort’s attack, but for causing his downfall in Godric’s Hollow on Halloween 1981. Voldemort’s failed killing curse left a scar in the shape of a Lightning Bolt on Harry’s forehead which became as famous as the boy himself! Harry was also known by anyone who knew him to wear round-rimmed glasses, often held together with Spellotape! Both of Harry’s most recognisable features are displayed on our Harry Potter Slippers which will leave no doubt in anyone’s mind that you are a biggest (and most stylish, of course) Harry Potter Fan! Our Where’s Harry Slippers will make an puro magical-themed gift for anyone starting at Hogwarts, or simply wishing they were! 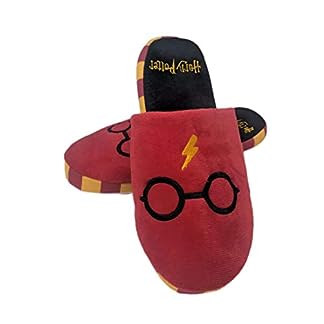